What’s this case about?

The sole Czech distributor of the approved test formulated by a U.S. producer, which enables classing patients diagnosed for malignant breast tumour in one of three risk groups according to probability of recurrence, is the company XENEO, s.r.o. Its 30-percent owner, Mgr. Michal Burger, is at the same time a co-owner of the Institute of Biostatics and Analysis (“IBA”) and researcher of the Institute of Biostatics and Analysis of the Masaryk University Faculty of Medicine and Natural Sciences (“IBA MU”). Another co-owner of the private IBA Company is RNDr. Ladislav Dušek, Ph.D., a member of the Board of the Czech Oncology Association and the management of IBA MU. There is, among the members of the Supervisory Board of the private subject IBA, also a Member of Parliament and head of its healthcare affairs committee, Professor Rostislav Vyzula, CSc, who also serves on the Board of the Czech Oncology Association. This association is one of the most senior expert authorities concerning the recommendation of cost reimbursements in the field of cancer diagnosis and treatment. The said relationships and membership of business corporations were relevant at the date of publishing the case, i.e. 1 December 2014.

It is quite surprising to see the Czech Oncology Association so “vehemently” yet rather unconvincingly (see downloadable presentation) refuse to recommend the reimbursement of a more recent test, formulated by the German manufacturer in 2012. According to several studies, this manufacturer can boast of forecast results that are comparable with and indeed better than those displayed by other tests. It has been officially recommended by specialist associations (German AGO Guidelines) and applied in Germany, Austria, Switzerland and some other member states of the European Union. Moreover, the costs of the complete test are about half of those of the approved testing method.

In addition, better forecasting results of the as yet unauthorized test enable patients after breast cancer removal to skip unpleasant and costly supportive chemotherapy, with its known adverse impacts on the patient’s body.

Our downloadable presentation shows the abovementioned personal relationships and further interesting circumstances (including the revealing facts about the deputy head of VZP ČR). 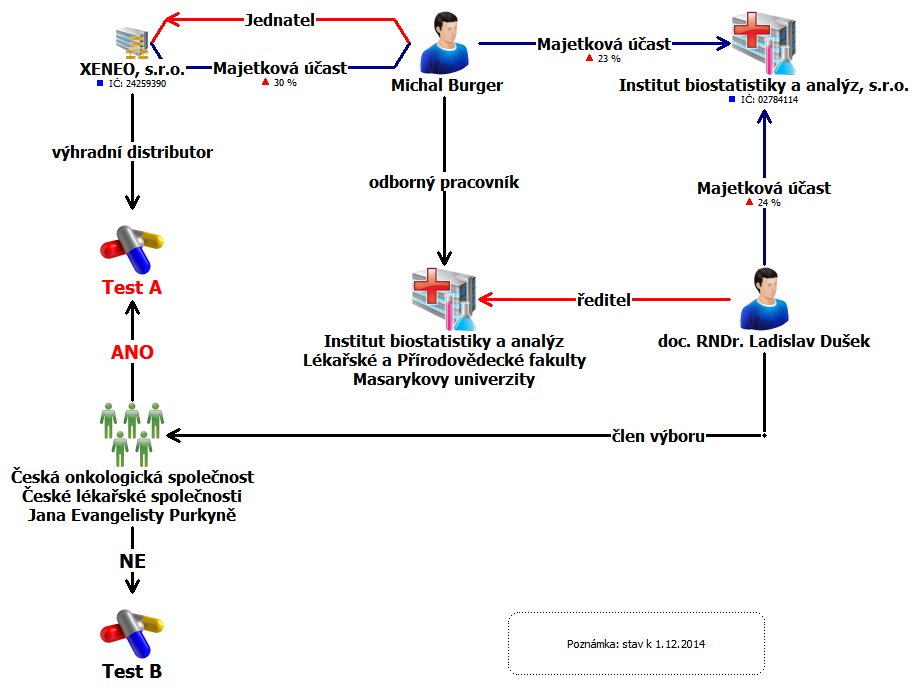 We have gathered substantial in-depth information and issued a press release including a presentation.

We are talking about tens of millions of crowns every year.