The state has given its blessings to a new monopoly on the electrical waste market and the Ministry of the Environment is working to consolidate that. The ministry is drafting a bill on reclaiming products past their useful life with the provision that all electrical waste must be channelled through selected companies. Massive stripping of billions of crowns from public funds might continue with even greater intensity than today.

Recycling used electrical appliances is closely associated with the future disposal of solar panels past their useful life. The case is thus growing even more urgent and serious. NFPK has information that certain circumstances of this issue have received the attention of the European Commission. Breakthroughs have lately occurred in the barrier of fear and the damaged subjects publicly admit that the NFPK was right from the outset.

What’s the case all about?

The Czech State intentionally established a system of nontransparent financing of disposal of electrical equipment and electronic waste past their useful life (hereinafter “electronic waste”), biased in favour of five selected private companies (“collective systems”). They virtually gained a state monopoly on collecting recycling fees from electrical equipment users, amounting to billions of CZK. The recycling fee is supposed to cover the costs of collection, transportation and environmentally friendly disposal of electronic waste. But while the duty to pay recycling fees is sanctioned by the law, the public has no control over the actual handling of the collected fees on the part of these private subjects. According to well-founded estimates arrived at by the NFPK, more than five billion CZK were “lost” in this system over about seven years.

The ASEKOL and ELEKTROWIN collective systems are among the prominent private concerns within the system described. Through their umbilical links to certain senior ministry officials and political figures, some of these collective systems are working to pursue monopolization of their advantage even in future. This will enable such concerns to dictate the amount of recycling fees and other payments to electrical equipment users and other subjects. A substantial proportion of electronic waste possesses a “positive value”, meaning that even without recycling fees one can earn more than the acquisition costs on selling further the precious metals and other spoils separated from a vast amount of electronic waste thus obtained. 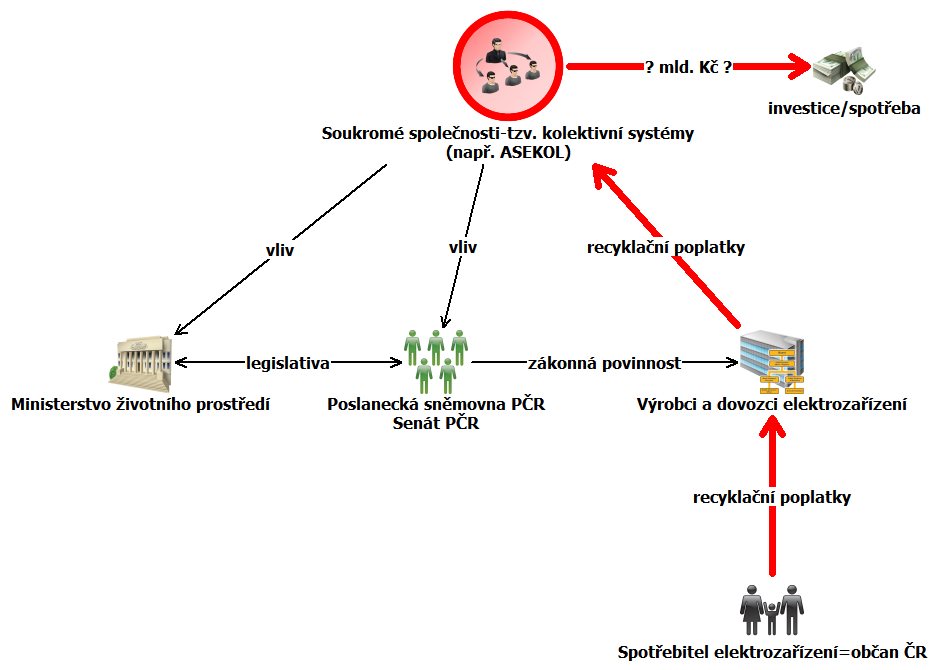 What we did in this case

In the spring of 2012 a brief and then a detailed press release addressed the complex issue of the funding of electronic waste management in the Czech Republic. On the basis of extended analysis we presented at the conclusion that by the end of 2012 the bank accounts of the abovementioned private companies (collective systems) ought to have still included about eight billion CZK but this amount simply was not deposited. We “encountered” the said companies on the pages of trade periodical, Odpadové forum. Subsequently we worked to collect more detailed and supplementary information on this case from people engaged in the system. We submitted information about unprecedented shady dealings by some of these collective systems to a representative of the European Union. We continue to closely monitor the case.

We are talking about billions of CZK and additional funds stashed away to private bank accounts. According to the Office for the Protection of Competition, these are public funds and they should be returned to the national budget.

Bad press and attempts to discredit us, undertaken by some collective systems (especially ASEKOL and ELEKTROWIN) or their principals (producers/importers of electrical equipment)

Who stands accused/charged or convicted?

The Association of Information Technologies and Telecommunications has sued an unknown delinquent in part of the electronic waste case for abuse of official powers and corrupt conduct. The Association has accused officials of the Ministry of the Environment of complicity.