NFPK pointed out serious circumstances pointing to an unusual behaviour of AK ŠACHTA & PARTNERS in providing services to Na Homolce Hospital (“NNH”) or its subsidiary, in part in connection with the lease of medical stores in the NNH premises to a private customer – the company ALSEDA s.r.o. (“ALSEDA”). ALSEDA was legally represented by AK ŠACHTA & PARTNERS, associated with lobbyist Ivo Rittig. NFPK presented important evidence of property-ownership character, concerning the family of Dr. Vladimír Dbalý. In June 2013 the offices of MSB Legal (formerly ŠACHTA & PARTNERS) were raided by anticorruption police and in June 2014 police detained Dr. Dbalý and his former aide, Michal Toběrný.

Time elapsed since the NFPK filed suit against Dr. Vladimír Dbalý, but potential offenders have not been convicted as yet (yy/mm/dd):

Na Homolce Hospital (“NNH”) leased its medical material storage spaces on its premises from 1 July 2009 to a new operator—the company, ALSEDA. NNH charged the new company a monthly sum of 140,000 CZK (lease and other receivables). However, the new private store manager subsequently received a monthly pay from contractors (for storing their products), which was 50 times the monthly payments forwarded by the store manager to the NNH. Chief among the contractors paying for the storage of their materiel to ALSEDA was Holte Medical, a.s., a subsidiary of NNH, which operated the warehouses before 1 July 2009. ALSEDA was represented by Attorneys at Law, AK ŠACHTA & PARTNERS (now MSB Legal), with known liaison to lobbyist Ivo Rittig. According to NFPK estimates, the NNH was losing about eight million CZK a month for leasing its storage facilities to the company, ALSEDA. This amounts to an annual loss of around 100 million CZK. 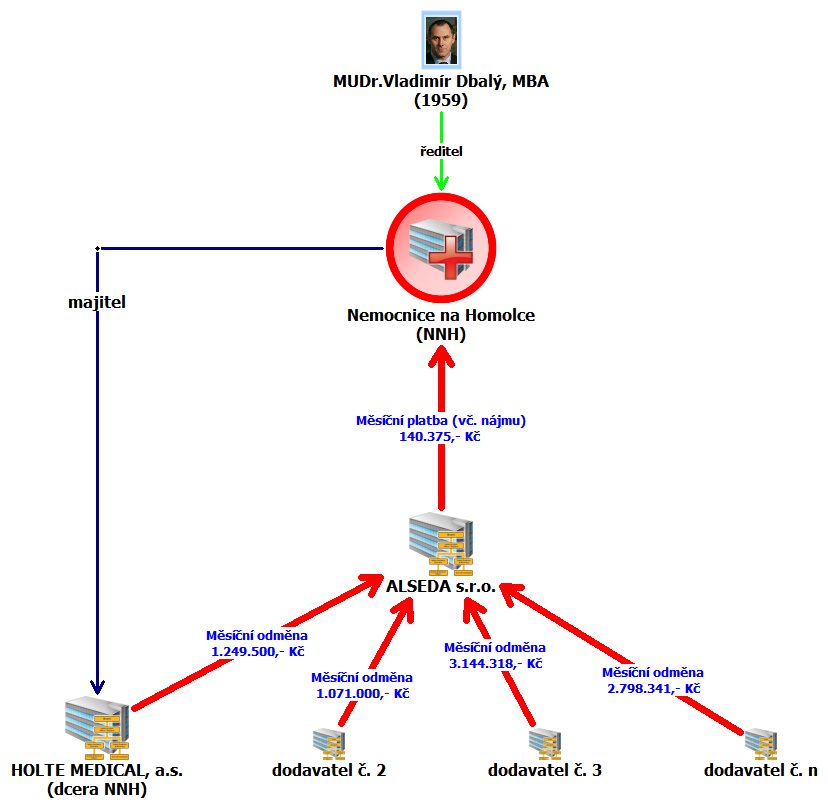 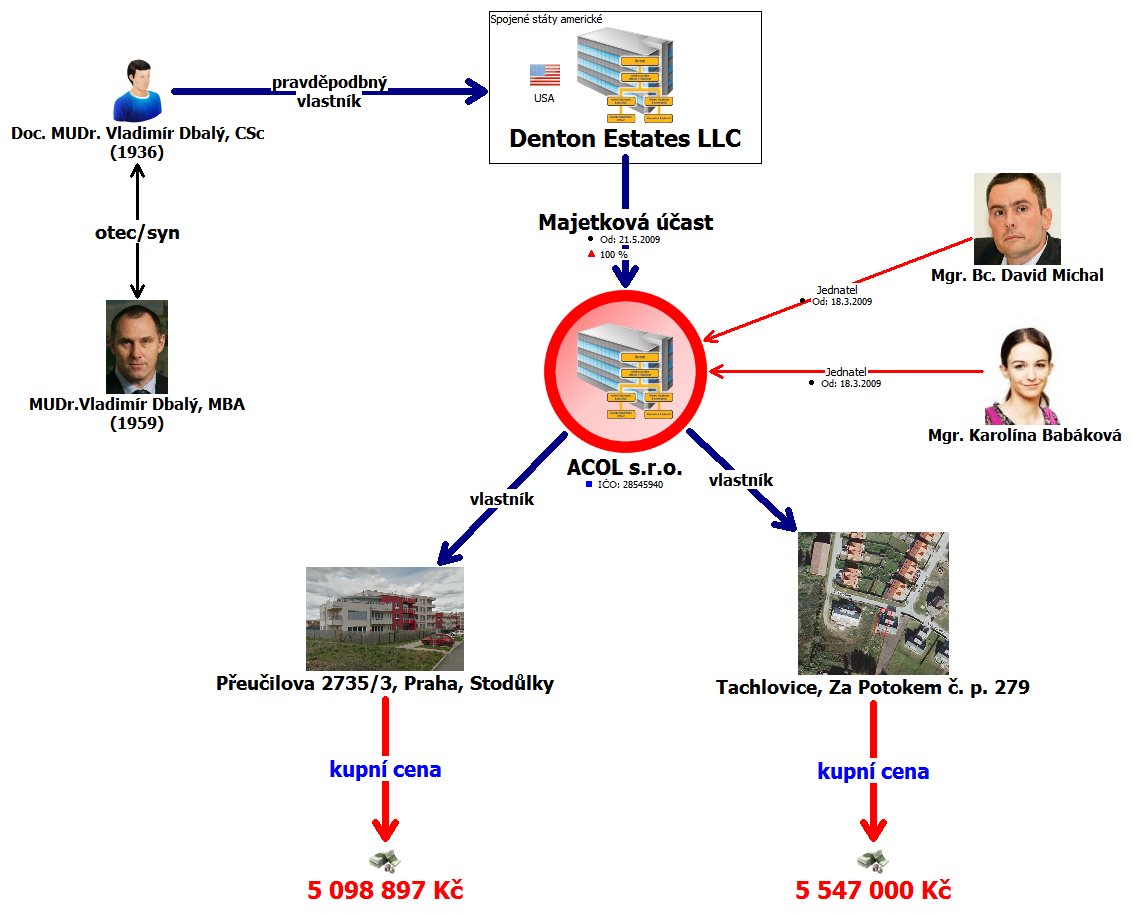 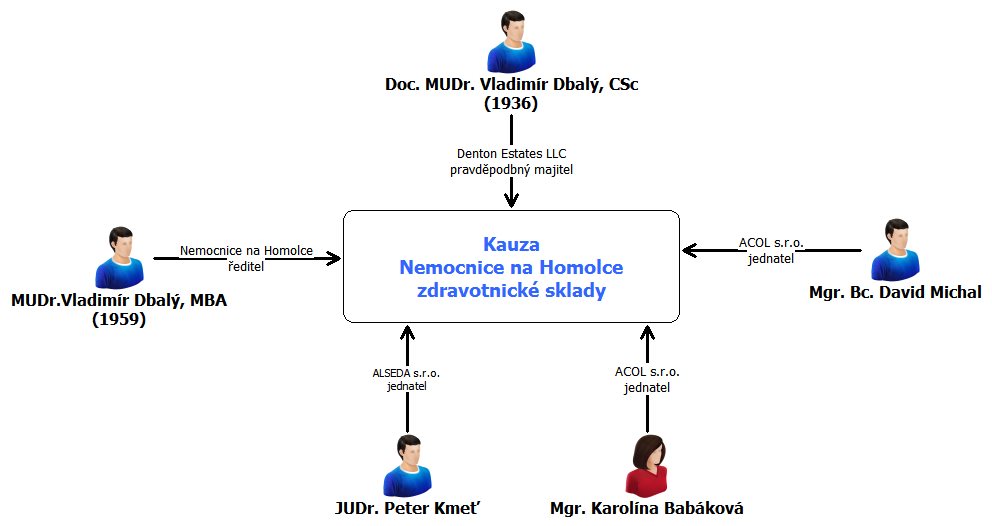 We briefed a 4 Oct 2012 news conference about the circumstances of the case and provided a descriptive account to the media. A few days later, on 10 October 2012 a press release was issued in which we fully disproved the assertions of MUDr. Vladimír Dbalý, MBA, made in reaction to our press conference. On 8 November 2012 we sued ex-Director of Na Homolce Hospital, MUDr. Vladimír Dbalý, MBA and unknown delinquents on suspicion of neglecting his duties in the management of foreign assets. We follow the Na Homolce Hospital very closely and have submitted some additional findings to the police.

It should be noted that on 25 June 2014, police arrested four persons in connection with another Na Homolce Hospital contract, including that hospital’s former manager, MUDr. Vladimír Dbalý, MBA. He and the other persons were remanded in custody. The detainees were said to have formed an organized group that supposedly caused damages amounting to at least 50 million CZK to NHH.

We are talking about tens of millions of CZK.

Chief among them is negative pronouncements and a defamation attempt on the part of persons from the former management of the Na Homolce Hospital, as well as representatives of ŠACHTA & PARTNERS Attorneys at Law (now MSB Legal). Further adverse statements came from lobbyist Ivo Rittig.

Who was accused/charged or convicted?

In the context of another Na Homolce Hospital contract, four persons have been charged, including that hospital’s former manager, MUDr. Vladimír Dbalý, MBA. He was also remanded in custody. The detainees were said to have formed an organized group that supposedly caused damages amounting to at least 50 million CZK to NHH.