What the case is all about

Prague’s Sixth City District (Prague 6) was entrusted with the administration of the premises of Pod Marjánkou Clinic, a property of the Prague City Council. The premises comprise of a clinic building (with a non-residential floor area of around 6,000 m2) and adjacent land (ca. 5,300 m2). Prague 6 leased the clinic to private practitioners, laboratories etc., for which it received an annual rent of around 3.7 million CZK.

In November 2010, Prague 6 Mayor Mgr. Tomáš Chalupa entered into a contract of lease with private company Comitia Medical, under which the Pod Marjánkou Clinic complex was leased to the latter entity for an annual rent of half a million crowns over a period of 30 years. The monthly rent amounts to only seven crowns per square metre of non-residential premises!

The new operator undertook to run a non-state healthcare establishment in the building (subletting spaces to practitioners) and to carry out an overhaul of the building, totalling 90 million CZK, at its own cost. On the other Hand, Prague 6 undertook to pay insurance of the building for the duration of the term of contract, which by rough estimate amounts to some five million crowns over 30 years. However, the revenue from the sublease contracts with doctors and laboratories will be cashed by the new operator, and its value is conservatively estimated to be between 185 and 300 million CZK (the operator’s revenue from the said sublease contracts in 2013 totalled 6,160,690 CZK with 63 % of the clinic building occupied). Prague 6 effectively lost this revenue when it rented the clinic out, and will receive only about 10 million crowns for the 30-year lease.

Additional relevant circumstances of the case are available in the presentation, “Why did Prague 6 renounce its millions?” a shorter and longer version of which can be downloaded from the Anticorruption Endowment website (see below). 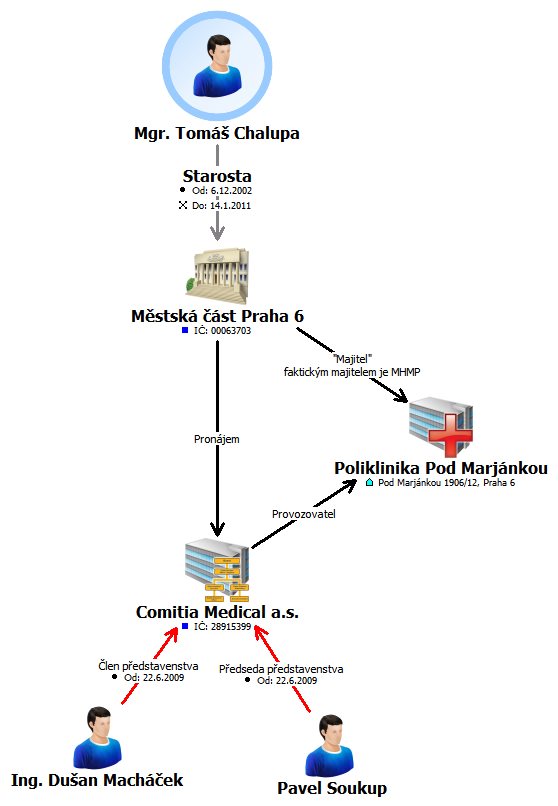 What did we do about the case?

We have gathered substantial in-depth information, pressed charges and issued a press release including a presentation.