Total healthcare spending in the Czech Republic in 2010 amounted to about 284 million CZK, about 214 million CZK (three quarters of the total amount) being expended by health insurers, some 42 billion CZK by households (15 percent), around 25 billion CZK (nine percent) were paid from the national budget, and the remaining three billion CZK (one percent) were refunded by additional sources (nonprofit organizations, private insurance policies and employers who pay for preventative health checks of their employees). Government spending (national budget outlays, local budgets and health insurers’ costs) for health care projects amounted to some 239 billion CZK in 2010. A fifth or even fourth of total spending went for medicines and healthcare aids. The State Institute for Drug Control (SÚKL) is entitled to decide about the maximum prices of curative preparations, scope and remuneration of their cost, registration procedures, and clinical evaluation of medicines. Therefore SÚKL is a very powerful organization. It commands significant funds for its operation, which fact might have tempted many agents to siphon them off. Hence the case described below.

What this case is all about

A report on forensic investigation of 22 January 2013 when the State Institute for Drug Control (SÚKL) was led byMartin Beneš, revealed serious mistakes concerning financial management and the conduct of public tenders. The report provides a detailed description of dozens of cases demonstrating mismanagement of the institution’s funds and indicating probable circumvention or even breach of the public procurement act.

For the sake of illustration, here’s how a public order for hardware delivery of 2011 was approached. The contract’s anticipated value was 1,990,000 CZK minus VAT, and the winning bidder, ICT Energo s.r.o., obtained it in an electronic auction for 1,977,162 CZK minus VAT (less than 13,000 CZK below the projected value). There were three bidders (NETPROSYS, AVENET and ICT Energo), two of which had one and the same CEO (Pavel Kocour), while the third bidder’s CEO had in the past worked for one of the two “rivals”. The offers presented by all three bidders displayed an identical grammatical mistake in Czech (“Kapacita baterie bude je 97 Wh“). The prices offered by all three bidders were in the interval between 99.35% and 99.93% of the expected maximal price of the order in accordance with specifications. The course of the electronic auction was quite unusual: ICT Energo cut its price offer to a price one CZK lower than that offered by the company AVENET, which, however, did not react to the price reduction and the contract ultimately went to the company, ICT Energo!

An underlying order was for the delivery of construction work (building overhaul), including the provision of hardware and software plus services (contract awarded to the company, VÍTKOVICE IT SOLUTIONS). A brief summary description, documented on specific cases in the report, offers the following quotation from the report:

“There probably were not too many instances of competition between the bidders in public tenders for public contractors. The bidders’ offers often displayed signs of agreement reached by the bidding parties (e.g. identical grammatical errors or texts, minimal departures from the price offered), or a bid was presented only by one of the contenders approached. In such cases only minimal price savings occurred in respect of the anticipated value of the public procurement order. Consequently, public contracts were awarded during the relevant period e.g. to: ICT Energo, VÍTKOVICE IT SOLUTIONS, AVENET, TRONEVIA, and AQUASOFT.”

“In the relevant period, the companies NETPROSYS, AVENET, VÍTKOVICE IT SOLUTIONS and VISITECH had—or still have—one and the same CEO, namely Pavel Kocour. These companies either competed against each other for several public tenders, or were among the parties requested to present their bids. These companies received a total of 150 million CZK without VAT for the goods and services delivered during the relevant period.”

The report includes a not less alarming description of expenses incurred by SÚKL for PR services, marketing, lobbying jobs, and even the provision of anti-eavesdropping equipment. SÚKL is an organizational component of the State and it would be quite difficult to explain why a state organizational component spends money for the services as above, including anti-eavesdropping devices. 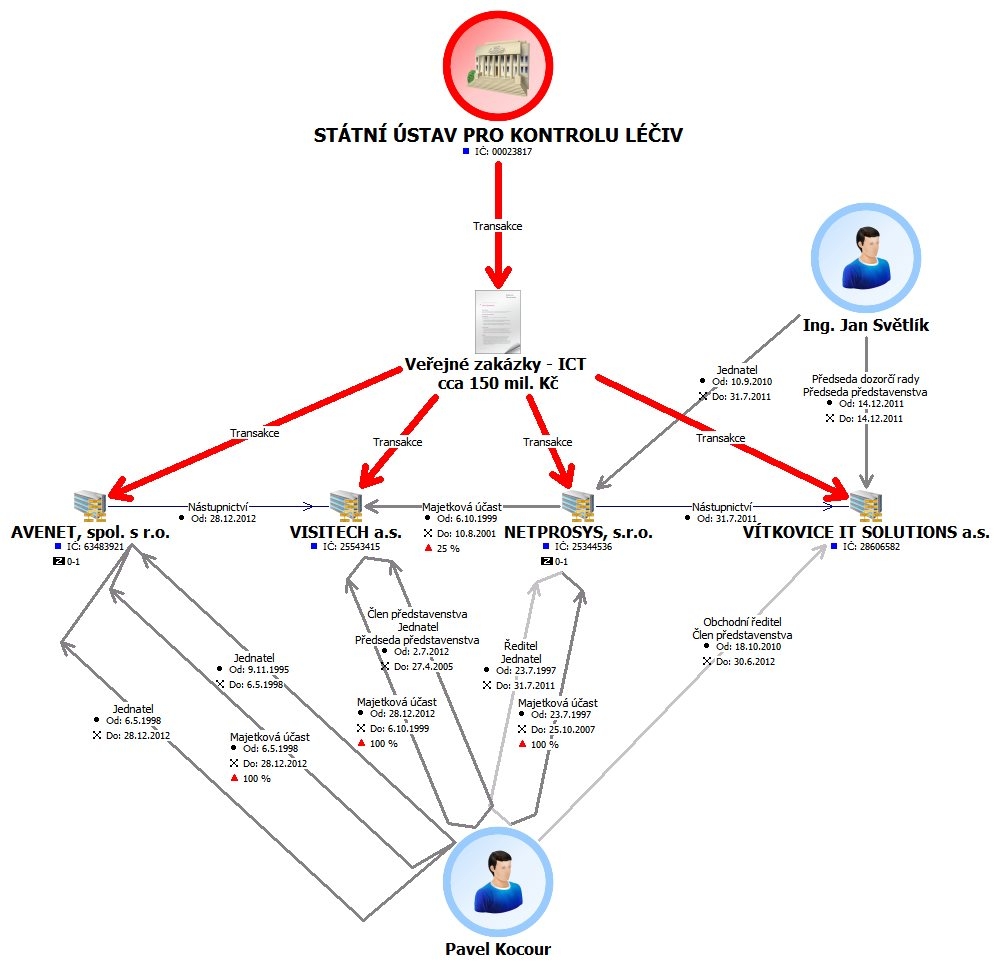 Briefly about the State Institute for Drug Control

The State Institute for Drug Control (SÚKL) is an administrative authority whose competences include decisions about the maximal prices of medical preparations, the amount and conditions of their reimbursement, registration and clinical assessment of medical drugs. Furthermore it acts as a supervisor of medical drug production in the Czech Republic. SÚKL reports to the Ministry of Health.

Decisions made by the institute affect a fifth to fourth part of total spending by the Czech healthcare system (amounting since 2009 to about 290 billion CZK every year), concerning medicines and healthcare means. For illustration, the 2012 pharmacy sales of prescription, special request and over-the-counter medicines amounted to about 66 billion CZK (the share of free sales of medicines including surcharges amounting to about 17 billion CZK). It is safe to say that the power wielded by SÚKL is truly enormous. Equally enormous is the pressure exerted on SÚKL’s decisions by political and lobbyist quarters.

After Tomáš Julínek became Health Minister in January 2007, the post of Director of SÚKL went to Martin Beneš. He was sacked by the new minister, Leoš Heger, in February 2012 and replaced by Pavel Březovský. The new director ordered an economic audit covering the tenure of his precursor, Martin Beneš. The audit resulted in a Report on Forensic Investigation (hereinafter “investigation”) of the State Institute for Drug Control, dated 22 January 2013 and provided by auditors Ernst & Young. The relevant period for investigation extended from 1 Jan 2009 to 30 Sep 2012. The Anticorruption Endowment is in possession of a copy of the Report.

It should be noted that two years later, in February 2014, Pavel Březovský was fired by the new health minister, Svatopluk Němeček, and a “crisis manager”, Zdeněk Blahuta, was appointed a temporary head of the institute. He immediately ordered a forensic audit of SÚKL’s economic management under his predecessor, covering the period from February 2012 to February 2014.

What action we took

NFPK filed a criminal complaint and issued a press release.

We are talking about tens of millions of crowns.