The Government decided in favour of a second breaking of the brown coal mining limits, by its Resolution 827/2015 of 19 October 2015 which, however, was based on documents falsely provided to it on the basis of false information from the firm Severočeské Doly a.s., Chomutov (SD) and its proprietor, ČEZ a.s.

The false information entails the concealment of a profit of 132 million metric tonnes (mt) of free coal deposits from a part of the Důl Bílina mining space, occupying the territory of the evacuated municipality of Libkovice. SD and ČEZ gained access to these coal reserves under Government Resolution 1176/2008. However, their CEOs last year made the Government believe that the amount of coal their mines actually gained access to in that area in accordance with the said Government Resolution 1176/2008, and is available for mining today, is situated somewhere else! Their sketch delineated an area situated southwest of the municipality of Mariánské Radčice, in the former Růžodol landfill, a residue of the evacuated Růžodol village, on the proviso that mining would be allowed there in 15 years from now, at the earliest! Photo: Důl Bílina Mining Space 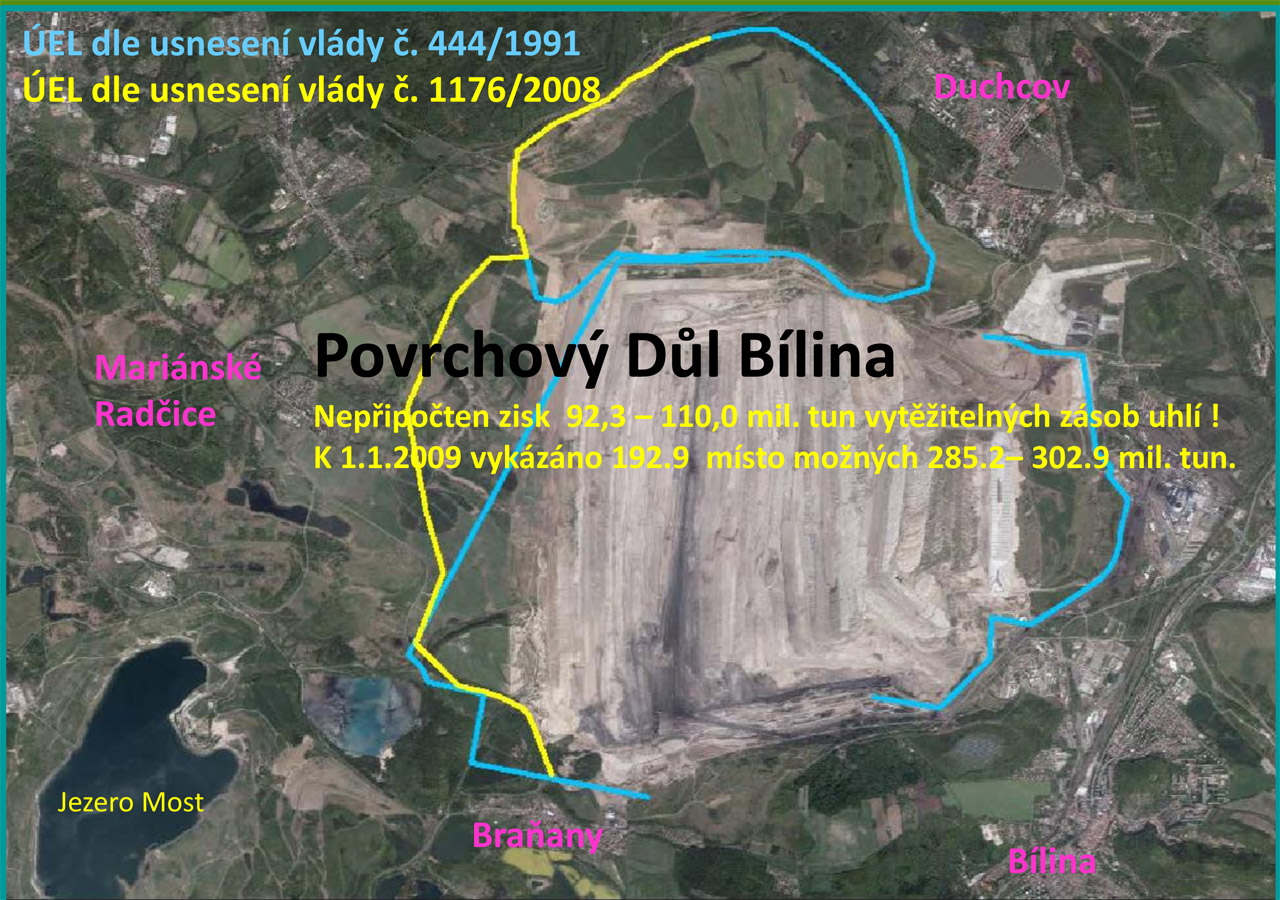 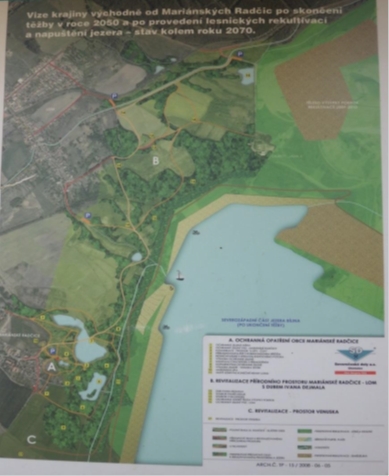 Steps taken to conceal 132 mt of brown coal worth over 200bn CZK to the detriment of state:

1) Coal extraction limits in the Důl Bílina mine were originally set by Government Resolution 444/1991. The boundaries of the Důl Bílina mining area were to be at least 500 metres away from the limits of the nearby municipalities of Braňany and Mariánské Radčice and the town of Lom in order to create sanitation zones, with precautions against noise and mining pollutants introduced in advance. According to the said resolution, miners stated that the coal reserves would last to warrant mining activities until 2031.

2) In 2003, SD’s top managers included this information in the document, “Evaluation of the Mining Situation”, subsequently released by the Brown Coal Research Institute in Most, which contained the following assertion: “According to various documents, it would be possible to extract between 92 and 110 million tonnes of brown coal of higher quality (calorific value 13 MJ/kg and more) in the area of defunct Libkovice, devastated by deep mining in the past.

3) In late 2005 the State sold its majority stake in SD to the utilities company ČEZ, which has held 100 percent of the shares since that time. In order to reach a settlement with minority shareholders, principal ČEZ commissioned “Expert Report no. 03-1/2006-K”. The firm Price Waterhouse Coopers stated in that expertise that there were 120 mt of coal deposited beyond the mining zone limits.

4) In February 2007, Braňany municipal councillors notified the SD management that the firm had failed to observe the terms of Government Resolution 444/1991 (blue line), as the mining line passed only 250 metres from their municipality, whereas the minimal distance should have been 500 metres. Therefore SD was obliged to ensure the prescribed width of the sanitation zone at Braňany by broadening it at the expense of the mining zone itself. It should be noted that the above-mentioned government resolution did not entitle SD to count the coal underneath the sanitation zone towards its coal reserves! Nevertheless, the SD managers declared that the 31.8 mt of “sacrificed” coal in the sanitation zone were by coincidence to be found in the area of the evacuated municipality of Libkovice. It was on the basis of these false arguments that the government released its Declaration 1176/2008 (yellow line). Due to that, SD actually got hold of 132 mt of free coal reserves, as corroborated by its documentation. A billboard posted at Mariánské Radčice since 2008 demonstrably shows (photo) that this area, delineated by Government Resolution 1176/2008, conceals coal reserves to last until 2050!

5) Miners’ trade unions last year staged protests, warning of reported coal shortages and a threat of massive unemployment. The key ministers—Mládek (ČSSD), Babiš and Brabec (ANO)—became veritable pushovers at the SD and ČSSD hands and agreed to a fresh breaking of the limits. This led to Government Resolution 827/2015 (red line). The government paved the way to unbridled extraction of 132 mt of coal, valued over 200 billion crowns, at the expense of the state, but the ČEZ supervisory board remains inactive!